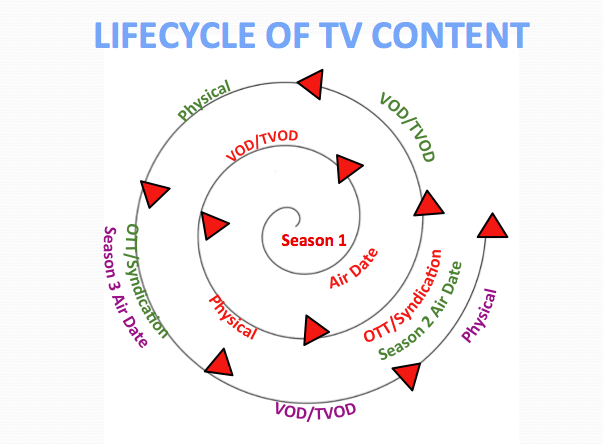 As programs made for the “small” screen take on an ever longer and ever wider range of viewing options, more and more is being written in the press about how complicated it is for the consumer to discover and find new TV shows that s/he might like.  Compared to content made for the “big” screen, in which marketing a movie for theatrical release plays nicely and directly into subsequent marketing for other release windows, marketing for television programs is in the middle of a sea change that makes for an extraordinary set of challenges, not just for IVA, but for our clients and our content partners.

Creating the database entry for a movie trailer is fairly straightforward:  put in the title of the movie, the director, cast, year of release, language, country of origin, and target market.  Upload the video and give the video asset a name if it didn’t come with one.  All subsequent assets get linked to that title, or more precisely to the ID that the title is given. We generally have many weeks, or even months in which these trailers are used.  The aftermarket use is good for years.  This is the same process IVA uses for video game trailers and music videos.  There are some complexities, like being able to distinguish one Harry Potter movie from another, or the animated ‘101 Dalmations’ from the remake.  We often append the year of release right into the title to facilitate distinguishing one movie from another.  (The full process of making trailers available is much more complicated and involves picking stills to use as thumbnails, encoding all the formats, plus QC, hosting and delivery tasks.)

Now let’s look at the process for a television program.  Most television programs are episodic and multi-season which meant that our first challenge was to create a database structure that provides for information about the series and its assets, the season and its assets, plus the episode and its assets.  We have triple the work for TV that we do with movies. Acquiring content on a timely basis is our second challenge since new episodes air every week.  For companies that want to feature TV on their site or app, the level of work can be overwhelming so our third challenge was to create APIs that let our clients update TV content programmatically.  Take a look at the diagram below and the Traversing TV video we created to help walk our clients through the database and the programmatic process.

Who Makes the Preview?

When a series is new, the marketing responsibility belongs to the network or cable channel airing it. Traditionally that has meant creating spots for the show that air on all the network’s affiliate stations.  With the advent of the internet, most spots also go up on the network’s or cable channel’s website. Sometimes there will be just one spot for the series; other times there will be spots for every episode. There can be challenges of both time and budget.  In subsequent years, there is generally a preview of the new season.  Sometimes there’s is a preview for every episode, and sometimes just for episodes in which there is a big guest star, a bit plot twist, or the season finale.  Sometimes episodic previews expire after only a few days.  For a client looking at our database of TV previews, it can look like we have a lot, or it can look like we have a lot of holes.

After the first season airs, a collection of all the episodes for the series will be made available in DVD and Blu-ray, and the responsibility for making a video promoting the collection will be the responsibility of whoever has the home video rights, usually whoever made the show: the History Channel, PBS,  the WB, or OWN.  That’s how it’s been.  With the advent of online services such as Netflix, and Hulu, plus OTT like Roku, and cable channel ‘TV Everywhere”, the patterns of viewership have changed to include week-after viewing, binge viewing, and year’s later viewing.  So now there are new marketing challenges.

Who Can Use the Preview?

The service IVA offers enables the team marketing a show in whatever window to put the preview of the show on a lot more sites and apps than their own – in fact the very ones that are devoted to content discovery, like NextGuide,  Zap2It, ShareTV,  Viggle,  Wikia, and Fanhattan.  Many content owners have embraced IVA’s service and we deliver trailers every day for NBC, A&E, VH1, PBS, USA Network, Discovery, Lifetime, Netflix, and others.  But we don’t have everyone yet.  Some marketing execs are used to controlling where and when their promotional content will appear.   IVA is working hard to assure these execs that we can have the same supportive relationship with them that we have had with movie studios for over 20 years.  But we understand their concerns.  A preview for the upcoming season of ‘Dr. Who” exists alongside previews for previous seasons, which could be on Netflix, or on DVD, or on demand.  In watching how the public responds to trailers delivered from IVA, we’ve come to believe that there are many points in a program’s life cycle that offer the opportunity for a new fan to discover a show.  We created the diagram below to illustrate what we mean.

Finally, we recognize that there is the challenge of how to treat content that never aired on a network or cable channel.  Millennials don’t really care where a program started out or how it’s delivered to them.  They may be watching on a laptop, or tablet, or increasingly on an internet-connected TV.  For them, it’s all episodes of a series.  That’s the way IVA treats them too.

In an ideal world, there would be a preview for every episode of every show available any time any where – because you never know when or where a new fan could be ready to discover something new.  Getting there is indeed a challenge – one we’re willing to keep addressing.

Both clients and content partners can help meet this challenge .  Clients,  let the makers of TV content know you get your trailers from IVA and that you’d like to  see a complete catalog of programs.  Content owners, try us out and see if we don’t enhance your promotional efforts by ensuring that your titles are on the sites where potential fans visit. Together we can all rise to the challenge of creating a robust market for TV Anywhere.”