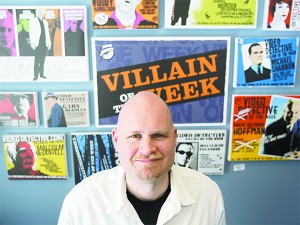 Rob Kelly was recently profiled by Kevin Riordon of the Philadelphia Inquirer in conjunction with his newly published book “Hey Kids! Comics!”.  It’s a great article with a nice mention of IVA.  Read on!

Rob Kelly remembers reading Aquaman in the back seat as his family headed for summer vacations in the Poconos.

That was in the 1980s, when Kelly was a comics-crazed, TV-and-movie-mad Cherry Hill kid with a weakness for the environmentally enlightened exploits of the amphibious DC Comics superhero.

Imagine how sweet it is for Kelly, now 42, to collect and curate other people’s comic book memories and reveries, including those of Aquaman scribe Paul Kupperberg.

“I became friends with him through my Aquaman shrine blog,” Kelly says.

“Even within the nerdy world of comic books, you have to have an extra layer of toughness to be an Aquaman fan,” he explains.

I get it: In the early ’60s, the older and therefore more powerful members of our neighborhood comic book buying collective assigned themselves Marvel superstars such as Spiderman and the Hulk. Meanwhile my pal Frank and I were ordered to purchase Aquaman and other DC also-rans like the Atomic Knights.

Nevertheless, a certain nostalgia informs my reading of Kelly’s book Hey Kids, Comics! As he writes in the introduction, this compendium of first-person stories is about “how comic books bonded, educated, comforted, entertained,” and otherwise mesmerized people.

Subtitled True-Life Tales from the Spinner Rack, in honor of those squeaky, carousel-like magazine displays that once graced drugstores everywhere, the book is available online at crazy8press.com.

“I wanted to concentrate on people’s emotional reactions to comics, not on the minutiae of comics themselves,” says Kelly, a Marlton resident. “I think the book will appeal to anyone who’s ever had a passion. For anything.”

Speaking of passion, Kelly’s full-time job gives him a chance to use his encyclopedic, if not Google-esque, knowledge of movies, TV shows, pop culture, and graphic design.

Kelly is on a team that works directly with movie studios, TV networks, and other entertainment producers to provide trailers and other promotional video content to a network of retail clients.

“I love this job,” says Kelly, and it’s easy to see why. The company’s geek-chic White Horse Pike offices are a gallery of pop culture memorabilia (a poster for Orson Welles’ Touch of Evil hangs near his desk).

The lobby showcases samples of Kelly’s own illustrations, including a poster he created for comedian Margaret Cho (it became her best-selling T-shirt, he says).

“One of the fun things about the company is that we need to have very creative people on staff,” says AVA communications director Pam Horovitz, whose husband, Jed, founded the company. The couple live in Mullica Hill.

“We have great hallway conversations here about what people are seeing, what they’re listening to,” she adds.

Kelly creates as well as consumes content of all sorts. In addition to his blogs, he writes a cleverly retro online comic strip called Ace Kilroy, for which he won “comic book writer of the year” at the 2013 Geekadelphia awards.

So devoted are fans of Ace Kilroy that they support an annual Kickstarter campaign to produce a hard-copy version of the strip.

Digital may be of the moment, but print is forever, says the man who packed as many as 50 comic books for those childhood vacations.

“You want to hold a comic book in your hands,” Kelly says. “I have a love for them that can never be replicated by looking at an iPad.”