A New Way to Rate Movies, TV Shows and Celebrities

Crowd sourced movie and TV ratings are used to determine the quality of a title but might not provide the guidance you want based on the demographics of the users that entered the rating.  Critic reviews can be considered a good way to sort quality titles but, again, it is opinion data. What if you could find a way to rate movies and TV shows in a more objective manner? Internet Video Archive (IVA) decided to take up that challenge to assist our clients in sorting hundreds of thousands of titles programmatically from our database.

IVA is introducing its new Power Ratings by analyzing over 100 different signals for movie and TV shows and then grouping them into the following categories: 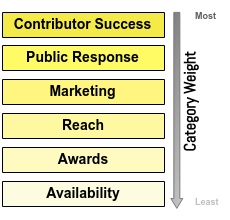 To measure a Contributor’s Success for each title, IVA first had to create a rating for each celebrity listed as part of the title’s contributors (defined as actors/actresses, directors, writers, producers, etc.).  The Celebrity Power Rating is its own rating and is accessible in the Celebrity Database. To create a Celebrity Power Rating, IVA grouped signals such as social media presence, image counts, filmography and more into the following categories: 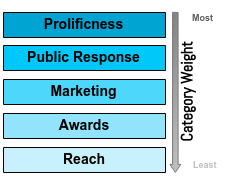 By analyzing all the categories and weighting them, IVA can begin to predict a title’s success based on the Celebrity and Title Power Ratings.  One of the first pieces of information that is released about a title are the celebrities attached to it. IVA analyzes the number of past appearances by a celebrity, the success of those titles that they worked on and awards nominated/won to create an indication of an unreleased title’s probability to be a hit.

Also, IVA accounts for the number of assets studios and networks provide to measure their effort to build audience awareness.  IVA uses its own Trending Data too, updated daily, to measure a title’s popularity across a number of platforms including trailer plays on video sites or the activity on social media in pre-release, gathering signals to determine the Public Response category.  A title with an 80% IVA Power Rating in pre-release is well on its way to success. For example, the upcoming Black Widow movie has a 78% IVA Power Rating.

The IVA Power Rating is fluid and will change as more data becomes available such as box office revenue, award nominations/wins and availability to purchase tickets, buy, rent or stream.  Also, as a celebrity has more appearances in movies or TV shows or wins more awards, it can lift a title and celebrity rating too.

By relying on more objective signals, IVA is offering its clients a new way to sort titles that will lift their ARPU (Average Revenue Per User) and predict which titles are most likely to be a hit before they are released.