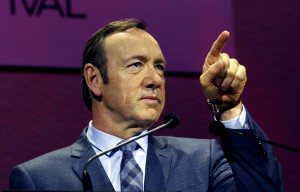 Will The Difference Between Movies and TV Disappear?  Kevin Spacey gave a speech recently at the Edinburgh International Television Festival in which he predicted that the difference between a movie and television show would disappear, because to the next generation of consumers “It’s all content, it’s just a story.”  Is he right? Could that really be true?  If so, what does that mean for our industry?  We thought we’d take a closer look.

The Consumer is King   Movies have long had a life after theatrical which today includes DVD, Blu-ray, subscription VOD, pay VOD, OTT, connected TVs – all flooding the living room with content that consumers can watch whenever they want. And that was Kevin Spacey’s second message:  The consumer is demanding the ability to control when and how they watch content. Viewers can binge on original series (like House of Cards from Netflix), catch up on yesterday’s sit-com on Hulu, re-watch episodes on their DVR, or watch commentary and extras related to their favorite shows on a DVD.  People are watching content on a variety of devices and in a variety of places: theater screens, TV screens, computer screens, tablets, and even smart phones.  Whether it’s a half hour show, a two hour movie, or a 15 minute short, so long as there is high quality storytelling it will hold the interest of viewers.

Webisodes and Binge Viewing  The quality of story telling is growing.  For example, over on the web, there is a growing audience for ‘webisodes’.  “Funny or Die”, the comedy video website founded by Will Ferrell, has grown exponentially since it launched in 2008. Growing audience means growing budgets which means more name actors, writers, and directors can be seen on these programs made specifically for web viewing.  Just as the publishing industry found space limits disappearing online”, the entertainment industry is finding time limits disappear online.   Dr. Horrible’s Sing-Along Blog and Neil’s Puppet Dreams both star Neil Patrick Harris.  The first is 42 minutes long while the second features episodes that are about 5 minutes long.  “House of Cards”, with Kevin Spacey, has  13 episodes that run between 46 and 56 minutes each, and got a lot of attention because Netflix, which commissioned the series, released all the episodes at once.

A Golden Age for Storytelling  It’s not just the flexible length of the storytelling that is attracting talent. The outstanding quality of plot, character development, and production, in shows like House of Cards, Breaking Bad, and Homeland has helped established high new standards for TV.  So more and more movie people are showing up on the dais of the prime time Emmy’s.  There’s no question that there is a growing level of equality in the status of TV vs. Hollywood inside the biz.

So we’re in a ‘golden age’ for TV and web content – which may not have the budgets of a tentpole movie, but which have what it takes to become hits in their own economic spheres.  Entertainment that was once clearly defined as TV, movie, or web series is moving toward a grey area that dismisses these labels.  In other words, Kevin Spacey was right.

How Is The Industry Responding?

Internet Video Archive has been watching the growth of TV and Web content for the last several years, and we expanded our movie trailer database to include TV previews in anticipation of interest on the part of our clients, and we’ve been aggressively pursuing promotional content from networks and program producers. We added a TV section to VideoDetective.com so we could begin tracking consumer interest.  Recently we integrated our previews for TV and web programs under the nomenclature “Series, Season, Episodes”.  But we still treat movies as movies.

Clients and partners of IVA are now taking advantage of ourrapidly growing catalog of video clips, teasers, and promos for series, shows, and episodes.  Earlier this week, Rotten Tomatoes announced the launch of its TV Zone which will feature Fresh/Rotten ratings accompanied by IVA video content,  establishing the site as a centralized destination for both TV and movie reviews and recommendations.

As the fall TV season approaches activity is heating up for IVA’s TV content acquisitions team. With an increasing number of customers leveraging IVA’s catalog of Series, Season, and Episode promos,  more networks are seeing the value in promoting their shows across the IVA network, resulting in an influx of clips, teasers, and promos for this season’s most anticipated shows.  Nearly 1,000 assets were added to this content vertical in Q3 and we expect to surpass this number in Q4 thanks to the hard work of IVA’s TV Acquisitions Department.   Our goal is to have a preview for every episode of every program.

We are seeing innovation and creativity propel the success of new forms of entertainment along with the tools we use to discover them.  It is often said that “competition breeds excellence”, and in a highly competitive content marketplace, this is continues to be true.