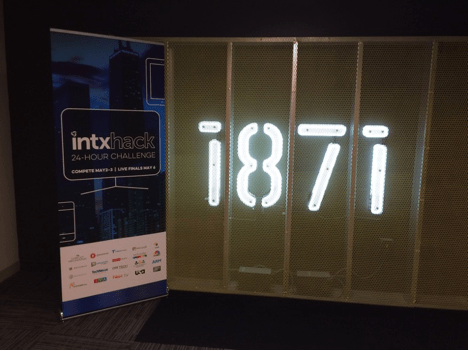 Congrats to 4K hax, Winner of the IVA Challenge at INTX Hackathon The winner or the IVA Challenge at this year’s INTX Hackathon in Chicago is:

Congratulations on a job well done!

The 4K team did a great mash-up using IVA’s Entertainment Express and lots of IVA trailers.

They took a 4K display from UXP, featured an IVA trailer at the entry point as a videogram; displayed our related content along the bottom with content from WURL down the right.

They also incorporated a neat drinking game that can be integrated with live TV with sensors from ARM.  The 4K team had lots of other great ideas , but unfortunately there just wasn’t time in 24 hours to get done. There was lots of interest in IVA trailers at the hack, in fact 50% of the teams used IVA APIs in their entries.  That meant IVA had some great challengers from which to choose a winner.

So the competition was fierce!

Here are a few pix, including one of Jason Schneid, who was IVA’s point man in Chicago.  Good job Jason! Good job everyone, and thanks to everyone who entered the IVA Challenge at the 2015 INTX Hackathon.