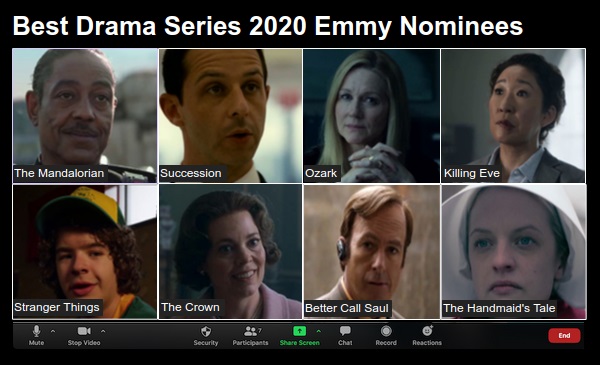 2020 Emmy Nominations: Consumers Win in Battle of Streamers and Networks

TV’s biggest night, like everything else, is being adjusted to accommodate life during the Coronavirus pandemic. Though the 72nd Primetime Emmy Awards will continue the tradition of celebrating the season’s best productions and performances, this year’s ceremony will be a virtual presentation. This could be one of the most star-studded Zoom calls of all-time.

With the nominees announced last week, streaming providers have been growing their original programs dominance.  Netflix took in a record breaking 160 nominations, with three shows competing in the Best Drama Series, proving it offers both quantity and quality.  New streaming provider Disney+ scored a nomination in the category for the new Star Wars related show The Mandalorian. Hulu had an entry with The Handmaid’s Tale making streamers the dominate creators in the category with 5 of the 8 nominations.

The premium network HBO came in second for most nominations with 107 total nods. HBO’s Watchmen earned 26 nominations, including Best Limited Series to lead all shows, also receiving top acting nods for stars Regina King and Jeremy Irons. NBC was the leader for broadcast networks with 47 nominations, followed by ABC with 36.  Prime Video’s The Marvelous Mrs. Maisel had 20 nominations, making it the second most nominated show this year.

As streaming platforms continue to fund programming that is uses to attract new subscribers and big networks responding in kind with their own streaming platforms and creating more original content, consumers are the ultimate winners.  As the battles go on, the fight for the next Game of Thrones or Stranger Things that wins Emmy’s and captures the public conversation guarantees a wellspring of fresh new TV shows to enjoy.

However, for consumers, the abundance of quality TV programming can make choosing a show that meets their tastes and interests into a daunting task.  Internet Video Archive’s B2B movie, TV, game and celebrity data can help businesses showcase titles by award nominations and wins, genres, themes, performers, power ratings, daily trends and more to guide consumers on what to watch and where to watch it.

Contact Sales@InternetVideoArchive.com now to schedule a personal demo and see how easy it is to programmatically integrate IVA’s data solutions into your service.